Diablo, a new movie starring Clint Eastwood’s son, Scott, is a throwback Western that embraces the tone and some of the visual nature of Clint’s earlier spaghetti Westerns. Not as gritty or mean as Leone’s movies, it still has a nasty, bloody side that follows the same path. But it doesn’t pull off the trick quite as well as those earlier movies.

Chalk that up to Scott Eastwood. Clint’s casual, flinty nature came across in every scene throughout those movies; he was the gravity that held the center with a believable effortlessness. His son, who can look uncannily like his father, suffers by comparison. He has many of the same manners, as if he had studied the looks, the squints, the movies of his dad, and was doing his best to channel the elder actor. He simply can’t manage the trick, though.

Luckily, Walter Goggins, of Justified and Hateful 8 fame, manages to inject life and menace into the flick. He has a knack for bad guys and he plays this role perfectly. Unfortunately, he has limited screen time to work his magic and what time there is doesn’t quite manage to redeem the movie.

The rest of the cast is solid as is the soundtrack and the cinematography. Of course, it helps to have the beauty of Alberta is your landscape for a movie like this; while the action is supposed to take place in Colorado, the gorgeous landscape makes a dandy stand-in.

The story of a man searching for his wife’s kidnappers meanders slowly– a pace that makes it’s relatively short running time feel quite longer– toward a twist that will leave most viewers entirely unsurprised. The writers telegraph that punch way too early and then fail to capitalize on the story’s abrupt left turn.

Which is a long way of saying that the movie just isn’t that good. It is, however, good enough to fill almost two hours on Netflix on a late, Saturday night if only to get that really strange sense of watching Scott Eastwood channel Clint’s old movies.

Score: 5/10 and just barely worth your time.

Tweet
Via Riot Act Media, if fuzzy, post punk type pop music is your thing, then this is your thing. Download “Lego My Ego” from soundcloud.
One of the songs from Jo Passed’s upcoming EP, Out, it’s heavily textured, buzzing with energy, and catchy in a head-nodding kind of way. I can’t wait to see what the rest of the thing sounds like.
Tweet

From National Review, we learn today that “Eliminating Gender Norms from Clothing Styles is Actually Transphobic” for some reason. This being the Age of Outrage, you can be damned sure that someone is going to preach the good word–which is to say, we’re not going to tolerate that shit.

But trans people should be aware that well-known faces like Jaden Smith are starting to encroach on our territory. They’re starting to wear the trans uniform without actually stating that they are transgender, and they’re claiming it for themselves under the guise of gender-neutral fashion. All of which begs the question: where does that leave us?

Well, Katie, I hope it leaves us in a place where we’ve reached (I hope, I pray) peak absurdity. This is a moment where it doesn’t matter what you say or do, someone will be offended. They’ll be offended because they prefer the social benefits of outrage over finding the good (or intended good) in what people do. They would much prefer to aggregate power behind cultivated victimhood than merely give the benefit of the doubt.

It’s a funhouse version of Warhol’s fifteen minutes of fame, though. In the future, everyone will spend fifteen minutes of shame at the hands of an internet lynch mob and no carefully assembled armor of social justice causes and virtue signaling can possibly save you. It will be a quiet joke told between friends, a well-meaning photo that you took (but didn’t vet with your minority advisory council), an inappropriately appropriated “ethnic” meal, a candidate or cause you supported decades earlier, a political donation you forgot to regret loudly and publicly enough, or merely daring to believe something outside of the current cultural orthodoxy.

Whatever it is, the lynch mob is closing in and your fifteen minutes of shame is coming up.

But, surely, no society could possibly withstand that, could it? No society can maintain a common fabric with so many power hungry, outraged fingers pulling at the threads. Surely, we’ll grow past this absurd moment and remember that the other people on the receiving end of our outbursts of self-righteousness are just like us: imperfect folks doing their best to get along. Surely, we’ll remember to extend them good will and the benefit of the doubt when they say something questionable (and maybe even remember that it isn’t our place to police every word that comes from their mouths to begin with).

Surely, with generosity of spirit and kindness in mind, we’ll remember that ripping each other to shreds and leaving careers, personal reputations, friendships, and dignity in tatters isn’t the best way to build the better world that we all are aiming for.

Because today deserves guitars, drums, and a very strange mess.

Happy Birthday remains the most profitable song ever. Every year, it is the song that earns the highest royalty rates, sent to Warner/Chappell Music (which makes millions per year from “licensing” the song). However, as we’ve been pointing out for years, the song is almost certainly in the public domain.

Don’t know what it is about this song, but I’m really enjoying it right now.

Because we like music, here’s a little happy something for mid-day.

I would have imagined that Calexico would have done better with “I’m Alright” (the theme to Caddyshack) but this cover of Kenny Loggins’ “Danger Zone” has proven me wrong. Loads of fun. 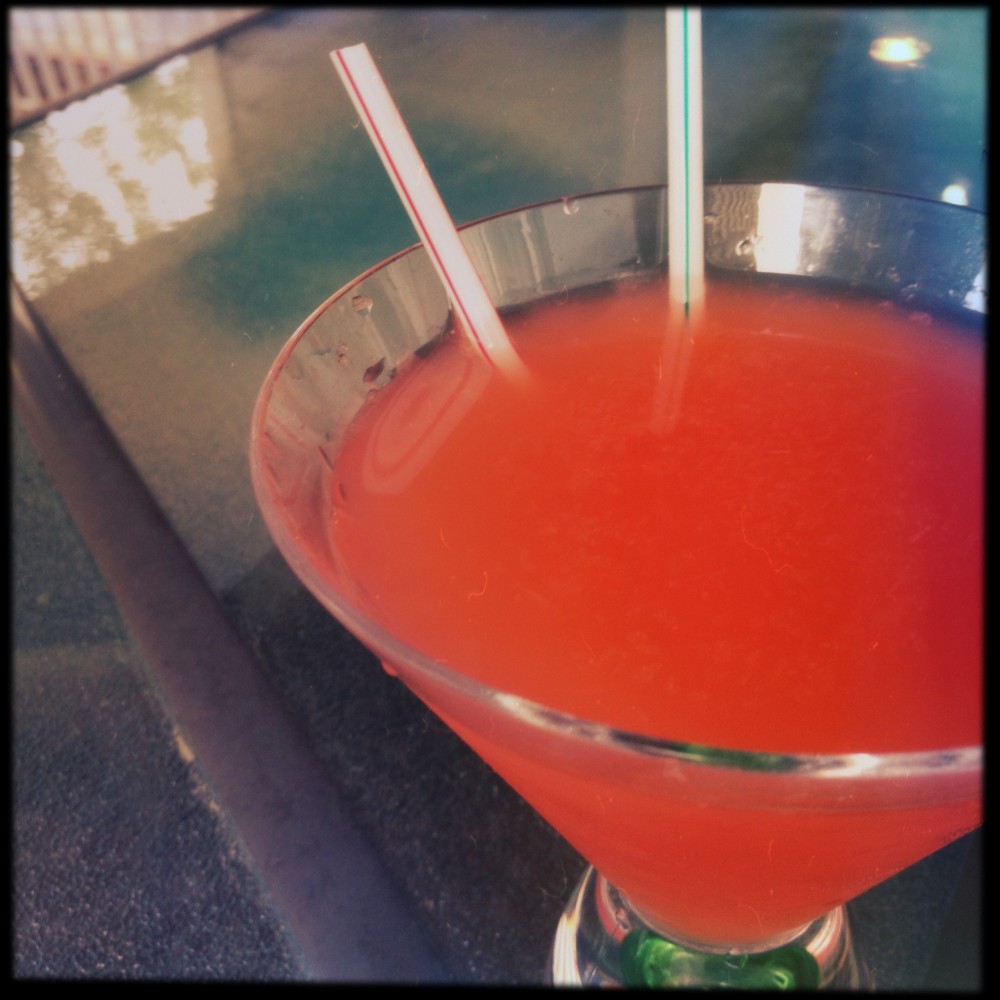 According to my wife, this one has a little tiny bite to it, which is where I found the name for this drink. Of course, it’s entirely possible that someone else has made a similar drink and that it has another name– I did a cursory search, found nothing, and ran with the ball.

Chalk the little nibbles up to the generous dose of ginger flavor and the spicy bitters. More importantly, though, it’s a sweet, cool breeze on a hot summer day.

Pour all the ingredients into a shaker, fill the shaker with ice. Shake vigorously and strain into a large martini glass. Garnish with whatever citrus fruits you happen to have around the house. If you find it too sweet, dial back the falernum and grenadine to taste.

Note: don’t settle for Rose’s Grenadine. It adds sweetness without adding flavor– either buy a good grenadine syrup (like Monin or Sonoma, for example) or make your own from one of the recipes easily available online that has both the flavor and the color to finish off your drink properly.

I have a feeling that this one might serve as the basis for a few variations. It’s easy to make and tasty with enough alcohol to be effective.