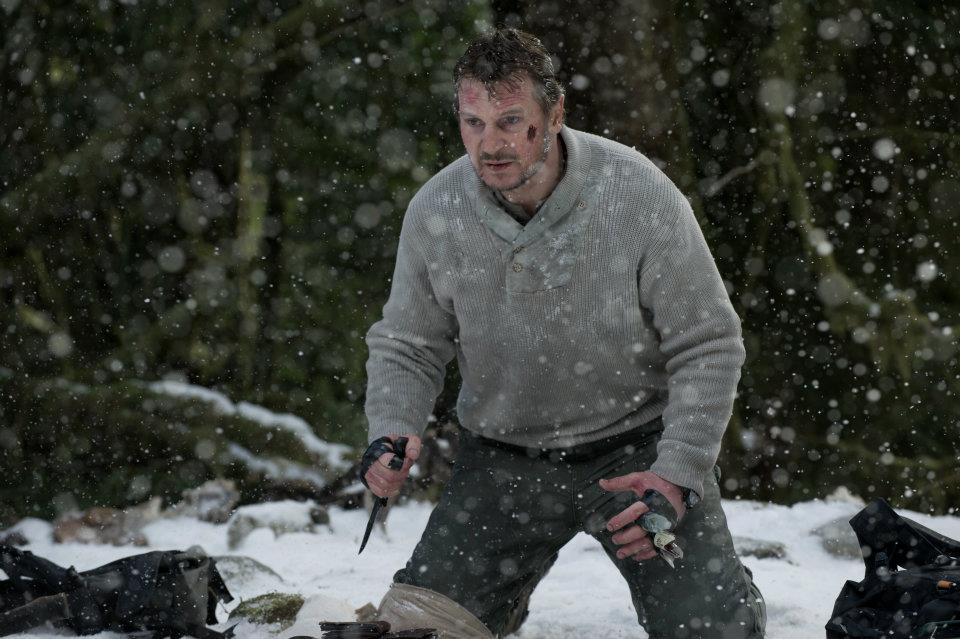 I rented The Grey with low expectations. In fact, the only reasons I watched it were that Liam Neeson is almost always worth watching and I thought it might be a nice background diversion while I did other things. And low expectations are nice precisely because they leave room for you to appreciate a thing on its own merits instead of in comparison to unrealistic expectations. It was undoubtedly a better movie than I expected.

Before continuing, I have to acknowledge the negatives: the animatronics are distractingly bad at times, the acting is uneven, and, yes, the portrayal of wolves is nothing like the reality of our fine, furry brethren. Wolves don’t actually go around hunting folks and aren’t particularly vindictive.

But that doesn’t matter a bit. The wolves are merely a framing device that brings together the various aspects of its movie. At its core, The Grey is a Jack London-esque survival story that also encompasses elements of horror (the wolves being, essentially, ghosts) with a thread of philosophical questioning that runs throughout. It is simply told, but it is most certainly not a simple movie.

That isn’t to say that this is some Zen koan; there is tension, blood, and violence happily occupying that bit of the viewer’s mind, but there is a depth and sadness to it that probably wouldn’t have worked so well without Neeson’s expressive face and talent. The beginning of the film, an introduction to Neeson’s roughneck character working in wildest Alaska, we see a character steeped in an unexplained, brutal sadness.

When Neeson’s character, Ottway, is left stranded with a group of other roughnecks. Ottway, who had been ready to let go of life, is transformed into a man struggling to live. And the movie plays this so well: with rising tension shot through with moments of silence and visions of the absolute, desolate beauty of Alaska. And through it all, we are invited to consider man’s urge to survive, the presence (or absence) of God in our lives, and what it means to face death– both our own and that of those that we love. Indeed, it’s in those quieter moments that the movie finds its real power.

It is undermined a bit with its basic horror movie structures wherein characters are lost in a serial, and predictable, way. This is unfortunate because the movie does provide some edge-of-the-seat moments and tense action. Even worse, some of those deaths are surprisingly affecting. While a couple of the characters are killed off in standard, gruesome ways, some of them are given more dignity and meaning in their passing. Watching these characters– characters that the director strives to treat like real individuals instead of the kinds of cardboard cutouts that inhabit secondary roles in similar movies– struggle so hard for life only to succumb to a brutal world is breathtaking. Heartbreaking, in fact, but also instructional.

This is a movie doesn’t treat its characters with kindness. It is pitiless and struggle doesn’t guaranty any kind of happy result. In fact, it would be easy to read it as a repudiation of the idea of God; in a world with this kind of unfeeling and cruel, where could God possibly fit? At one point in the movie, when Ottway is screaming for a sign or a glimpse of God, his cries aren’t met with rainbows or signs from heaven.

I concede my biases as a Christian and it isn’t an explicitly religious movie, but I would consider that an overly easy reading of the film. There are hints and glimpses of God throughout, but the God presented isn’t one that rescues the roughnecks from all their mortal woes. He does, though, bring grace and peace.

The Grey is a gorgeously shot moviewith a surprisingly thoughtful side. It isn’t what I expected and, in most ways, it is better. Its ending might not suit all comers and folks expecting straight up action or horror will be disappointed. While it is let down here and there by an imperfect script and bad acting in some of the supporting roles, while it falls into a trap of predictability in some of its plotting, and while some of the wolf effects are inexcusably bad, there is a worthwhile core and a grasp at something meaningful that disarmed me.

Bottom Line: It’s a movie that wants very much to be more than just a genre exercise, and it fulfills that goal. There is something worthwhile here, but I’m left believing that the market for a horror-survival movie with regular philosophical meanderings is relatively small. Anyone who fits that demographic should find value. Folks looking for unrelenting gore and action are bound to be disappointed.